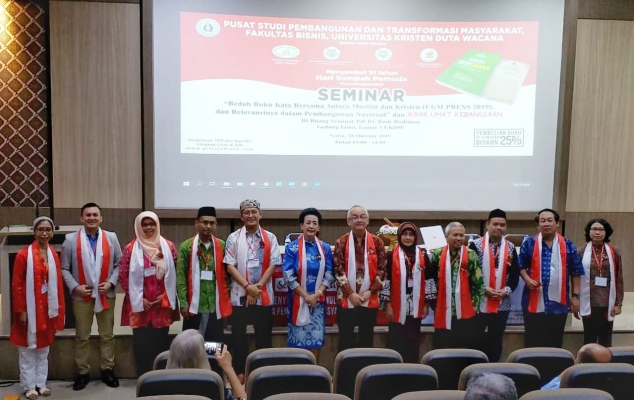 Pusat Studi Pembangunan dan Transformasi Masyarakat (PSPTM), Faculty of Business Universitas Kristen duta Wacana collaborated with Pondok Pesantren Sunan Kalijaga, Pusat Studi Keamanan dan Perdamaian (PSKP), Universitas Gadjah Mada, UGM Press, and Koperasi Konsumen Griya Jati Rasa for celebrating 91st Sumpah Pemuda Day on Monday, 28th of October 2019. The event which held in seminar room Pdt Dr. Rudy Budiman took a theme "Seminar Bedah Buku Kata Bersama antara Muslim dan Kristen (UGM Press, 2019) dan Relevansinya dalam Pembangunan Nasional". In the report of this event, Farsijana Adeney-Risakotta, as an Investigator of Samigaluh Tanggap Globalisasi Program, said that the celebration of Sumpah Pemuda Day which is entering the 10th decade is very important because Indonesia this day is facing fundamental questions related to national unity. The commitment of youths who met in Batavia to strengthen their identity in the middle of colonial era. They conveyed their pledge about the bond of language (kebahasaan), country (ketanahairan), and nationality (kebangsanaan). At the beginning of 10th decade, the awareness about reliogion is very important as formulated in Pancasila that should be pledged together. Therefore, in the celebration of Sumpah Pemuda national pledges were also carried out.

This book gives deeper the theoretical foundation and application towards statement leters of 138 intellectual representatives, mufti, Islamic Theologians around the world about the relationship between Muslims and Christian. For Indonesian version, this book discusses about the relationship between Muslims and Christians by conveying the topics in which related to Muslims and Christians theologically including allowing two female theologians from each of the Islamic traditions (Siti Ruhaini Dzuhayatin) and Christians (Farsijana Adeney-Risakotta) talking about Al-Quran and Bible in relation to the topic women and transformation of religious traditions as theological and sosiological studies which influence the role of women historically in the world and in Indonesia. Other than that, the topics such as spiritual studies, metaphysics, environment, human rights and development are in deep dialogue with both Islamic and Christian thinkers.

The words "Kata Bersama" whic is a quote from Al-Quran "Kalimatun Sawa" is actually an invitation from 38 Islamic Theologians and Islamic Scholar from around the world to Christians respond to the speech from Paus Benediktus XVI in Regensburg on 13th of September 2006. In taht speech He conveyed that the most fundamental simlillarity between Islam and Christian which is the best basis for building the dialogue and living together is love to the God and humans. Since the lifetime of the Prophet Muhammad SAW, this is the first opportunity when Muslims make statements about Christianity. The relationship between Muslims and Christians largely determines the future of the wolrd. Nowadays, the population for both Muslims and Christians is about a half population all over the world, hence the impplementation of justice and peace which involving both Muslims and Christian is determine the world peace in the future. This belief has been proven in religious life in Indonesia. Tensions between religious communities, a large part of which is between Islam and Christianity, among the majority of which can be contested can lead to horizontal conflicts that use violence. Despite all of conficts in Indonesia that happen caused by misunderstanding between the two religions, Indonesia's diversity has developed thinkers for helpping in implementing Pancasila as fundamental ideology of Indonesia. Theoritical appication is also being discussed in the book Kata Bersama antara Muslim dan Kristen, and it shows that there is a chance to develop collaboration between Muslims and Christians through developing activities.

Related to that, Samigaluh Tanggap Globalisasi, religious responsibility (STG), was facilitated by Center for Development and Social Transformation Studies, Faculty of Business Universitas Kristen Duta Wacana to prepare local people in Kulon Progo in facing the existence of Yogyakarta International Airport. Since STG Programme was launched in 2018, both Muslims and Christian community is succeed to increase the harmony between the two religions.

The definiton of National Development shows the goal of Indonesia as formulated in TAP MPR No. IV MPR/1999, “Pembangunan Nasional merupakan usaha peningkatan kualitas manusia dan masyarakat Indonesia yang dilakukan secara berkelanjutan, berdasarkan kemampuan nasional dengan memanfaatkan ilmu pengetahuan dan teknologi, serta memperhatikan tantangan perkembangan global” (National development is an effort to increase the quality of human and IIndonesian people which is carried out sustainably, based on national capabilities by utilizing science and technology, and taking into account the challenges of global development). In the context of the book Kata Bersama antara Muslim dan Kristen, the existence of a shared awareness of global challenges that can solve the harmony of religions, it is important that development programs can be built from exploring Islamic and Christian values (UGM Press, 2009, pg: 604). The clash between indigenous interests in the colonial era was reflected in the difficulty of formulating regulations that would reflect the economic behavior of the natives. However, in the end a regulatory agreement on the Bumiputra Cooperative association was issued in 1927. Development programs from religious institution initiatives are often seen as part of missionary activities for the conversion of people. Competing to be the best in serving others should encourage cooperation between Muslims and Christian.

Both Muslims and Christians are the asset of Indonesia which also a part of Indonesian culture, as written in both Al-Quran and Bible. The alignment of the National Development implementation which reflected from STG is focuse on empowering the local people to develop cooperative movement. The initiatif from Musims community before declaration of Sumpah Pemuda in 1928, like explained by Rahardjo needs to be considered together especially after cooperative movement become a part of religious community's commitment. By working together, they can help each other to share their resources to strengthen mutual success in the cooperative. The relationship between Islam and Christianity is a blessing for Indonesia's religious diversity as declared by the father of the nation in the formulation of the Pancasila and the 1945 Constitution.

The invited speakers are: